Justice for my Uncles disappeared by the army of E.S.

On January 17, 1981, at 2:30pm, my uncles, Jorge Alberto Rodríguez Romero and Francisco Milton Romero Sequeira, went out to the Chagüite River in the municipality of Cuscatancingo, department of San Salvador, to bathe. At  4:30 pm, a family friend told my grandfather (who was the father of both - deceased) that his sons had been captured by the First Infantry Brigade of the San Carlos Barracks in San Salvador. From that day until the day of his death my grandfather carried out different legal actions, petitions to NGOs, churches, International Agencies for the liberation of my uncles. 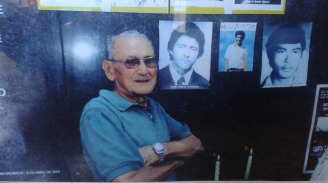 Since my grandfather's death in 2014, I have continued my grandfather's struggle to know the truth and to obtain justice in the case of my uncles, as I promised him. Therefore, I have presented Habeas Corpus to the Supreme Court of Justice of my country, complaints to the Office of the Attorney General for the Defense of Human Rights, and hearings with different authorities and international agencies, For this reason, the Chairperson-Rapporteur of the Working Group on Enforced or Involuntary Disappearances, Tae-Ung Baik, has sent me an e-mail in which he expresses the opportunity to participate and be heard during the 123rd session at the Office of the United Nations High Commissioner for Human Rights in Geneva, BUT I DO NOT HAVE THE ECONOMIC RESOURCES FOR THE FLIGHT OR FOR THE STAY, I NEED EVERYONE'S HELP TO BE HEARD AND TO KNOW THE TRUTH AND TO OBTAIN JUSTICE, AS I PROMISED MY GRANDFATHER ON THE DAY OF HIS PHYSICAL DEPARTURE.

I would be very happy if you would use the [Collaborate by Sharing] button to share my project!